The Long Road to Starting a Story by Kathleen de Azevedo

Writer Kathleen de Azevedo was born in Rio de Janeiro, and has spent most of her life in the U.S.  Her work has appeared in publications such as Américas, Boston Review, Gettysburg Review and the Los Angeles Times, among many others. 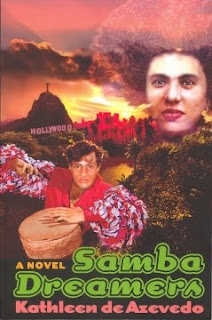 
The following is a guest blog post by Kathleen de Azevedo regarding finding and grasping the elusive beginning of a novel.  She also offers some fantastic advice.  I offer my sincerest gratitude to a wonderful writer and exceptional woman.

Thank you, Kathleen, for sharing your thoughts with Musings and your wonderful advice with my readers!

Please enjoy this fabulous post and put Samba Dreamers on the top of your To Be Read list!

When writers tell me they have an idea for a novel but don’t know where to start, my answer is: “What writer does?” We are used to seeing movies of writers typing “Chapter 1", on a piece of paper, then writing their masterpiece without a hitch (except for a few rumpled balls of false-starts),  finishing with the typed words “the end.” To add insult to injury, these same  writers get their work accepted by a publisher in the next scene. Some writing workshops emphasize the craft of “great first paragraphs” of fiction, but often, that “great first paragraph”  only comes after many bungled middles and ends.

Creating a piece of writing is no more regimented than how a composer initially begins creating music with a few notes or sounds.  My writing starts in snippets, little scenes. These snippets may or may not end up in the final product. This “snippet stage” is where I get to know the characters; I am touching the clay to see what kind of shape it will hold. For example, my novel Samba Dreamers about Brazilian immigrants in Hollywood, started off as a couple of poems written many years apart, while I was writing other things. One poem “Famous Women – Claudette Colbert” was about a car breakdown in Hollywood. The poem ended up to my surprise, in the Best of American Poetry series. The other poem, never polished or published, was about a Hollywood tour bus driver who falls for a Haitian housekeeper that he sees through the gate of a mansion. Then, I wrote and published a Hollywood short story, “Rosea Soccorro Katz, Coconut,” cannibalized from an earlier unsuccessful work. Meanwhile, I went on to write completely unrelated fiction, including an unpublished novel.

During that time, I learned Portuguese and traveled to Brazil so I could start writing Samba Dreamers. When I came back from my trip, I turned “Rosea Socorro Katz” into a chapter of the novel, and threw out the poems as new text emerged. Years later, Samba Dreamers was published by the University of Arizona Press.

With the novel, as with all my work, I start with small pieces of writing, and once I have enough of these small pieces to put in sequence, I  arrange them in what I call a “rough cut,” much like early dailies of a film, where scenes shot that day are put in sequence. If I’m writing a novel, and the piece gets long enough, I start breaking the material into chapters, developing those ideas and inserting other chapters. At a certain point, I start outlining what I have.

But wait. The draft sucks. I toss the draft away, then start the whole process again. Oh yes. This happened to the current novel I’m working on. I wrote several versions of the book, all versions completely different.  Many years later I can say that I’ve done seven major drafts. And by draft, I mean a major-major overhaul. This doesn’t count the drafts I’ve worked on internally. Only now am I at the polishing stage.

So why bother with the business of writing at all?  It takes a long time to write a novel, certainly a longer than a short story or a poem. But writing a novel allows me to immerse myself in another world for years. It’s like a long-long movie where the story is never the same. I learn more researching a novel than I could learn in a whole semester in school. Though writing short fiction is less cumbersome,  the process is the same: writing snippets, rearranging, rewriting, rediscovery.

My advice I would give to writing fiction is this:

1.  Start off writing smaller pieces. If some of those pieces end up being short stories and poems you are proud of, polish them and submit them to publications. This way, you’ll get the feel of the entire writing process from start to finish. Before marketing a novel, you almost need to have published in smaller venues. You will get used to working with different types of editors. You will also feel less discouraged if you succeed in getting your work out there.

2.  Start wherever you want in the storyline. When you get the feel of what you want, then fill out other portions.

3.  Throw out lots of work. If you save some of your writing, refrain from reading it again. By this time, that perfect phrase is so embedded in your prework, it will go faster to just write certain passages over again. The passages will improve as you get more familiar with what you want.

5.  Try not to read a lot of articles on “how professionals do it” if they don’t have a day job. Most of us have day jobs. Remember that writing doesn’t just belong to the elite.

Everyone has significant “stages” in one’s life, so consider the piece you are working on to be one of those stages. Samba Dreamers was the novel I rediscovered my roots in Brazil and relearned my native language. The stage I’m at now has to do with my work in progress, Love Song of an Injured Fisherman about a poor fishing village in Brazil and its struggle with progress. For this piece,  I revisited my mother’s stories of when she lived in the northeast of Brazil. I also did a lot of reading of Literatura de Cordel, folk poetry of the Northeast, (much like the Mexican corrido).

My newest piece which I’ve put aside for other projects, is about Jews in Brazil and that’s all I can say about that. The story is about three brothers, two of which have stories about where I want it. The third brother though, I’m debating whether I should give him a full life or kill him off, if only I could decide which path he should take!