Born in the USA: Writing Contest Submission Alert for Writers in WA, OR, ID, & MT 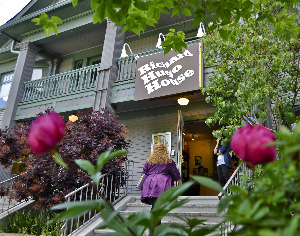 Their mission is to provide writers with resources, and to "connect audiences with the world of writing, foster the creation of new work and promote the literary arts as a vital part of our culture."

About the New Works competition from Richard Hugo House:

The theme is Born in the U.S.A., and the winner will receive $500, publication in City Arts Magazine and an invitation to read at the final Hugo Literary Series event on March 18, 2011 alongside authors Alan Chong Lau, Victor LaValle and Debra Magpie Earling.

The theme: All manuscripts must reflect the theme, Born in the U.S.A., using the prompt below as a jumping point:

Since the birth of our nation, we’ve grappled with the uncomfortable question of who gets to be American and why. My ancestors came over on the Mayflower; yours made the “middle passage” on a slave ship. Your grandparents were interned in a prison camp during WWII; you serve in the U.S. Army today. My older sister can be deported because she was born before our parents crossed the border, but I’m a citizen because I was born here. Our declaration says all men are created equal; our pledge to the flag says we are one nation, indivisible—so why do so many of us still hyphenate our nationality?  Whether you were born in Sarah Palin’s “real America,” The Daily Show’s “fake America” or somewhere in between, what does being American mean to you?

Submission Format: Five copies of the manuscript typed, double-spaced, pages numbered, in 12-point standard font. No name of author on entries; include cover page with name, address, phone, email, entry titles and genres. One cover page is sufficient for the five copies of your entry. SASE #10 for notification and SASE with sufficient postage if you would like manuscript returned.
Entry restrictions: The New Works Competitions are only open to residents of Washington state, Oregon, Idaho or Montana.
Entry fee: $10.00.
Submissions may be sent to Richard Hugo House, c/o New Works Competition, 1634 11th Ave, Seattle, WA 98122.

*********
Even if you don't enter the contest, this is a great writing prompt. Let me know if you decide to use Born in the USA as a prompt. I wrote a poem inspired by the facebook group Poets Responding to SB1070 that I'm thinking of polishing into shape to submit...what will you submit?
at 9:48 AM