So here I am, putting these songs out into the universe for everyone to hear, and I hope that you feel them and enjoy them as much as I do.
Rock Wilk's
Broke Wide Open "Unplugged"
Seattle Premiere
March 12, 2011
8pm
Sandbox Studio*15 McGraw St*Seattle*98109
(Queen Anne Hill)
tix $10 at the door or pre-purchase at: http://www.brokewideopen.com/home.html

About Broke Wide Open
Broke Wide Open was born from one man's quest to search for answers to his identity. Luckily for us, this man is Rock Wilk; a beautiful soul, a skilled poet and musician. Initially produced as a musical journey in form of an album, the one-man play was created while riding on the NYC subway system and explored issues of identity stemming from his personal history as an adopted child. A man who grew up with great admiration of, and love for, his adoptive mother, and a mystery for his biological mother.
I tried to reveal myself, to strip down naked and open my personal window, to let you see who I am, in hopes that you might allow me into your world, briefly, one song at a time.
About Rock Wilk
An actor, a playwright and a poet, New York City's own Rock WILK is also a socially and politically charged vocalist and an accomplished multi-instrumentalist. He creates all of this art while riding the subways of NYC. Along with being a Nuyorican Poet's semifinalist and 2010 runoffs qualifier for The Nuyorican's national team, Rock also was recently a featured performer for Amnesty International at an event for human rights.
My father and my grandmother were both great storytellers. Just sitting around after a meal with them was a gift. You would hear the most amazing stories. They both had this ability to make you hang on every word, to make you laugh until you cried.
He has worked as a studio and touring background vocalist for many years, most recently singing with the legendary Patti LaBelle and contributing vocal and horn arrangements to the Grammy Award winning Les Paul compilation album, LES PAUL AND FRIENDS.
Rock's music can also be heard on such TV shows as MTV's "The Real World" and "Making The Band", among others.
There were many times I didn’t think I was going to be able to complete this project, that it was just too difficult to get through, because I was digging so deep inside of myself.
Got WILK? 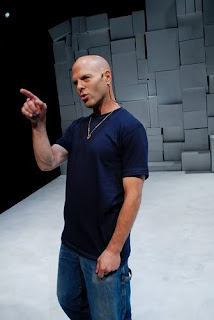