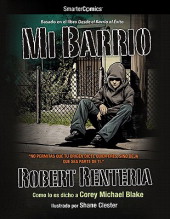 Author Robert Renteria and his graphic novel Mi Barrio will be stopping by each of the following blogs from 6/20 thru 7/1. Make sure you stop by and say hello, you may just win a copy of Mi Barrio by Robert Renteria!

***Have questions for the author? Want to share your experience? Have a youth that could use some motivation and inspiration? Grab them & your friends and join us for an author livechat on Sunday June 26th at 7pm Eastern/6pm Central at Condor Book Tours' Author Chat Salon.

A few words from the Robert Renteria:


Adapted from the book From the Barrio to the Board Room (2008) by Renteria, who created a foundation that brings his message of hope to inner-city schools...Mi Barrio hits all the familiar points in a straightforward first-person narrative that eschews subtlety in favor of its lessons, while the artwork conveys the clean, efficient sense of a corporate brochure. However, it has the undeniable gravity of the truth and its inspirational message does come through loud and clear as Renteria, encouraged by his loving mother and grandfather, learns a sense of discipline in the army and employs a philosophy of hard work, a never-quit spirit, and a drive to live out what he describes as “the American Dream.” Grades 6-9. --Jesse Karp (BookList)


This inspirational title, produced by the business books–into–comics outfit Writers of the Round Table, adapts businessman Renteria's 2008 memoir about his hard-knock life into a punchy, easy-to-digest story. Renteria grew up with a single mother in a rough Los Angeles neighborhood during the 1970s, where he did everything that should have gotten him killed: running with gangs, selling drugs, the works. A stint in the military straightened him out, but didn't provide many prospects for employment. After knocking around in Chicago, Renteria convinced the owner of a laundry sales company to take a chance on him. Cut to years later, and Renteria is a wealthy salesman who has started his own company and now also mentors and lectures about getting out of the ghetto grind (his quick answer: hard work). Clester's art is more highly accomplished than is usually seen in true-life graphic adaptations, and while Renteria's tendency to gloss over the details can leave his story feeling sketchy at times, it's a work whose hard-won sense of hopefulness outweighs any hint of preachiness.
(Publishers Weekly)