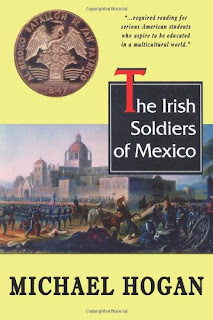 On the eve of Mexican-American War of 1848, a group of recently arrived Irish immigrants deserted the U.S. army and joined the Mexican army as the Saint Patrick's Battalion. This excellent study explores the motivations of the Irishmen, their valiant contributions to the Mexican cause, and the consequences for them when they were ultimately captured.

The Irish Soldiers of Mexico sold out four editions in English and two editions in Spanish from 1997 to 2001. It has been the basis of an MGM feature film starring Tom Berenger, two documentaries and has also been used in many history classes both in the United States and abroad. As Michael Hogan rightly points out in his introduction, American textbooks scarcely devote attention to this war. "Coverage," he writes, "generally consists of a two or three page section entitled Westward Expansion or Manifest Destiny."

The book is now available (Kindle & traditional) for the first time from Amazon.

Michael Hogan lives in Colonia Providencia, Guadalajara, Mexico, with his wife Lucinda Mayo, the internationally known fabric artist. Born in Newport, Rhode Island in 1943, he is the author of sixteen books, including a collection of short stories, six books of poetry, collected essays on teaching in Latin America, a novel, and a history of the Irish battalion in Mexico which formed the basis for an MGM movie starring Tom Berenger. His work has appeared in many journals such as the Paris Review, the Harvard Review, Z-Magazine, Political Affairs and the Monthly Review. He is a consultant to the U.S. Department of State’s Office of Overseas Schools in Latin America. As an author he has received wide recognition for his work, including a PEN Award, two Pushcart Prizes, an NEA fellowship, the Benjamin Franklin Award, the gold medal of the Mexican Geographical Society.

Fri Sep 2 Chica Writer (Review)
Don't mis out on all the fun during this book tour--buy your copy of Irish Soldiers of Mexico by Michael Hogan NOW ! 100% commissions from purchases made thru Condor's Bookstore will be donated to the Isabel Allende Foundation.