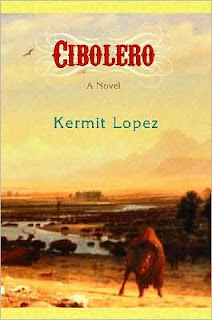 For years, Antonio Baca lived the wandering and restless life of a Cibolero, or buffalo hunter, following the great herds that roamed the endless Llano Estacado-the high plains of a region that would one day be New Mexico. After marrying and settling down, Baca has finally found a modicum of peace in the home he built for his growing family.  But Baca witnesses the transformation of Nuevo Mexico from an isolated colonial outpost of the Spanish empire to a province of the newly independent nation of Mexico and, finally, to a land conquered by the avaricious americanos. Following the United States's seizure of New Mexico, Antonio and his countrymen find themselves treated as foreigners and second-class citizens in their own land.  When his daughter, Elena, is kidnapped by a band of invading Texas Rangers after the American Civil War, Baca desperately tracks them across the llano of New Mexico and into Texas using his skills as a Cibolero. Terrified for his daughter's safety, he plunges into the world of the gringos, and discovers just how much the americanos have changed his homeland. But as the days pass without any sign of Elena, Baca fears for her life-and his own.

On one level, Cibolero is an action-oriented adventure tale as Antonio Baca sets out to rescue his daughter from an invading band of Texas Rangers using his skills as a Cibolero hunter.
On another level, Cibolero deals with racism, ethnicity and society in the “old West” and the historical ties of large parts of the present western United States to Mexico and Spain.  Cibolero is a fictionalized account of a true but overlooked part of U.S. history.
About the author:
Kermit Lopez wrote Cibolero after researching his family ancestry, which spans four hundred years of New Mexico history.  He received electrical engineering and law degrees from the University of New Mexico and lives with his wife and son in Albuquerque.   Mr. Lopez is also the author of the novel The Prodigy.
Unless you have been burying your head fully and completely in books like our friend Humberto the Bookworm Hamster, you have been hearing the discussions about self-publishing.  And more likely than not, you have even formed your own opinions regarding self-publishing.  It seems most of the conversation on the matter stems from parties who have strong opinions one way or the other.

Kermit, I'm curious as to whether you shopped around your Cibolero manuscript and later decided to self-publish, or if you decided from the beginning you were going to go the self-published route.  Have you encountered any bias because Cibolero is self-published?  What are the biggest advantages and disadvantages that you have found with self-publishing?  Will you continue to self-publish in the future?

I did initially attempt to shop the manuscript around  and targeted a number of mainstream publishers.  I actually had some interest from an editor with a New York publishing house, but when she presented the novel to her editorial board, it was turned down, despite her efforts to champion the book.  At that point, I decided to consider POD publishing on demand.  There were several reasons for this.  First, my first novel “The Prodigy” was POD published and I had a bit of experience with the process.

Second, as a patent attorney, I had worked on some POD patent applications for Xerox (one of our clients) covering some POD printing technology, so I was encouraged with the technology and the process.  I think the trend will be more POD and self-publishing, particularly given the advent of the Internet along with social networking sites such as Facebook, etc.  In other words, I see no stigma with POD and self publishing.

One lesson I learned from my first POD book “The Prodigy” was not to rely solely on my own editing skills.  With Cibolero, I actually hired a former editor to review and proofread Cibolero.  I would encourage any aspiring writer who wants to follow the POD path to use the services of a good independent editor.   There are many available and they vary in pricing but it’s well worth the cost.

I think a novel like Cibolero, which deals with a different take on US and latino history lends itself to POD publishing.  In other words, Cibolero is something of a niche book.  It is basically an “old fashioned” Western but from a Latino perspective.  Most people I have run into find the POD publishing aspect of the book interesting and “new”.   I have encountered very little in the way of POD stigma.  One disadvantage of POD publishing is that it really is up to the writer to be his or her own marking guru.

When (and if) I ever complete another novel, my plan is to first pursue mainstream publishers but also consider the POD publishing path.
Thank you, Kermit.  This is all really interesting.  Can you explain to me the difference between self-publishing and POD?  I notice the book is available through major retailers like amazon and target, do all POD publishers guarantee this sort of placement, or can you talk a little bit about distribution?

Does the POD company provide any services at all, besides printing? what about cover art design and layout?

How does POD work? Do they print a number of books at a time, or do they wait for a certain number of orders before publishing and distributing?

In these days of diminishing royalties, does POD also offer the author higher percentages of royalties?
I should have explained that POD is basically a form of self-publishing, the difference being that the POD publisher provides some traditional publishing services such as distribution through Amazon, etc.  Not all POD publishers have this kind of placement but the majority of them work with Amazon and Barnes & Noble.  Besides printing, some POD publishers do provide editorial services and some marketing services, along with cover art design and layout.

POD works in that the books are printed as an order arrives (e.g., someone buys an individual book through Amazon), rather than holding large amounts of printed books in stocks.
POD publishers also have a higher royalty rate than that of traditional publishers.
Thanks, Kermit.  As you can see, this is all very new to me.  I appreciate your willingness to educate me!
******************************************************************
This was really informative for me, but I still have some questions.  Luckily, because I'm hosting Cibolero's Latino Book Tour, author Kermit Lopez will be around today answering questions.
Please join me in asking any questions you may have about Cibolero, Kermit's writing habits, or the POD process.  And let us know what your experiences are with POD publishing!
This is a giveaway tour-anyone who leaves a message or comment today will be entered to win a copy of Cibolero!
Follow Kermit Lopez and Cibolero throughout his Latino Book Tour:
Mon Jan 25th: Sandra's Book Club
Tues Jan 26th: Musings
Wed Jan 27th: Latino Book Examiner
Thurs Jan 28th: Mama XXI
Frid Jan 29th: Latino Musings on Literature & More
Mon Feb 1st: Heidenkind's Hideaway
Tues Feb 2nd: Efrain's Corner
Wed Feb 3rd: BronzeWord Latino Authors
Thurs Feb 4th: TBA
Fri Feb 5th: Regular Rumination

or purchase through amazon:
http://www.amazon.com/Cibolero-Kermit-Lopez/dp/059543567X