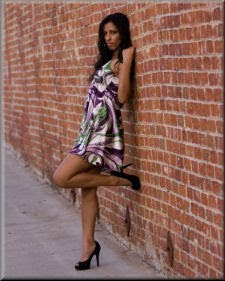 Ivet Fortun, aka Cuban Babe, is a multi-talented artist with music styles ranging from Reggaeton to Pop, and Rock to Salsa.

Cuban Babe's music is laced with her versatile and passionate personality.  Her first album, La Perla Negra, heavily infused with Regaeton and Cuban influences resulting in what some are calling Cubaton-style, debuted in 2007.  La Perla Negra is followed by the eclectic album Urbana e Intelectual, which is set to be released in spring of 2010.  An incredibly hardworking and driven woman, Ivet Fortun also operates and runs her own music label and publishing company (Reggaeton Records), is an actor, and runs a wedding-planning business on the side.

Amazingly enough, we were able to catch up with Cuban Babe recently and she gave us some insight into the woman behind the steamy, Pop-py new single, Que Dificil Es.

It's a pleasure for me to present to you singer/song-writer Cuban Babe.

NB:  Thank you, "Babe" for participating in this "Quienes Somos: Latinos in the Entertainment Industry" Interview.  Your newest single Que Dificil Es has a really catchy tune that tends to linger, and the theme, an impossible love between friends, is equally captivating.  Is it based on a real event in your life?

CB:  Thanks!  The chorus came to me while working on a different piece with a friend of mine who plays the guitar.  The idea came about because a former friend of mine had a crush on me and I wrote the song as if he was saying these things to me.  But I think for the most part most of us can relate at some point with the song.

NB:  Tell us a little about your second album, will it be Reggaeton, like La Perla Negra, or Pop?

CB:  Oh actually, the second album is going to be a half and half deal.  You'll find about 5 or 6 songs in pop rock and 5 songs in Reggaeton or Urban style.  That's why the album is called: Urbana e Intelectual.

NB:  Do you see yourself drifting away from Reggaeton?

CB:  I don't see myself leaving Reggaeton for a little while.  I love to dance and Reggaeton allows for a lot of that!

NB:  Do you have any early memory that, when you look back upon, you realize have helped shape your life?

CB:  I always had a passion for performing.  As a little girl in Cuba I would play with my cousin Yaumara at filming "music videos."  Of course my hands were the camera!  I, sometimes, was the director and sometimes, the star.  I would use different props and it was so much fun!  At my grandma's house, I would get a brush and would start performing.  Thanks for the question, it’s nice to remember things like that!

NB:  What kind of music were you into then?

CB:  I was into anything, from ballads, to rap and everything in between.  I remember liking Dulce, Marisela, El General, Vico C and others.

NB:  Who have been some of the most influential people throughout your life?

CB:  My dad.  I acquired my love for learning and books from him.  (He) introduced me to the works of Victor Hugo and Truman Capote.  He was an avid reader and we enjoyed talking about Literature. And my mom taught me how to work hard and be persistent.

NB:  When did you first realize you wanted to be an artist, and how did you go about becoming one?

CB:  Since very early on I was always very involved in performing in schools plays, recitals, concerts, and what not. When I got to the US I was determined to do this professionally.  I've since then pushed myself forward by using my resources to record my music, go to acting classes, networking events, etc.  In this time and era you can't afford to wait for labels to get you out there.

NB:  What are your musical influences today?

CB:  Cuban music, in general as well as Hip Hop and Cubaton.  My music is a mixture of my experiences growing up in Cuba and coming to the U.S.

NB:  What do you attribute your success to?

CB:  Being stubborn or persistent!

NB:  Can you give us an example of a time you did not take no for an answer and succeeded?

CB:  There have been a few.  On a visit to El Salvador I went down to a radio station and was determined to talk with the programming director. It took a little effort because nobody knew who I was.  But I persisted and got them to play my music for several weeks!

NB:  What has been your most difficult obstacle to overcome, whether personally or professionally?

CB:  I could talk on both.  Personally leaving Cuba, in the exile of 1994, as a teenager was devastating to me since I left my dad behind and didn't see him again until many years later.  Professionally moving to Los Angeles in 2002 was a huge step for me.  I was living in Albuquerque, NM at the time.  Found myself in LA with no money, job, or friends.  But I understand that life's struggles are necessary to develop character.  What doesn't kill you make you stronger, right?

NB:  Are there any words of wisdom that you fall back on when things get tough?

CB:  I have a very simply tactic.  When things get tough, and there is no way you can control a situation, the best thing you can do is "do nothing."  I go to sleep and usually when I wake up I see things in a whole new light.  Or the matter gets solved somehow.  There is always a solution.  I tell myself that in the big scheme of things it is simply not that important.

NB:  As a talented woman who has released two albums, runs her own independent label, publishing company, and wedding business-surely you have played an active role in your success! What do you fall back on those tough times when you do have to take control?

CB:  I pride myself on being very strong but when things get really tough it’s always essential to have the support of your family.  My family is my rock.

NB:  What do you believe is essential for Latino youth to understand regarding success?

CB:  I would like for them to know that success is not something that happens.  Success is discipline, it is a number of habits you must master to get there.  Each person must develop habits that work for their life style.  Their habits must be in congruency with their goals.  In my individual case, it is very important for me to feel balanced.  Therefore, one of my habits is to meditate as often as I can to keep me grounded.  I also have the habit of doing the most important thing first.  We all have to-do lists and sometimes get shuffled doing things that aren't as essential to our progress.  Also, make persistence a habit, be persistent on a daily basis.  If something doesn't work out, keep trying until it does.  You'll find a way to make it work.

NB:  Thank you so much for sharing with us, Ivet.  I wish you the best of luck on your journey!

CB:  Thank you so much for taking the time!

You can find out more information about Cuban Babe and her music at her website.

A special thank you goes out to Cuban Babe's Publicists at Three Girls Media & Marketing who were a joy to work with!