Virtual Book Tour: Bernardo and the Virgin by Silvio Sirias

The first Virtual Book Tour for Condor Book Tours (a service from my start-up nilki benitez communications) is well under way!

Bernardo and the Virgin by Silvio Sirias is the story of a simple man, a campesino, to whom in 1980, the Virgin Mary appeared.  This is one of the few Marian apparitions that the Catholic church has approved.

The novel, although based on facts, including extensive interviews with Bernardo Martínez (August 20, 1931-October 30, 2000) by the author, is also an exploration of the Nicaraguan people during a tumultuous time in Nicaragua's political history.

From the Posdata of Bernardo and the Virgin:

On May 8, 1980, the Virgin Mary appeared to Bernardo Martínez-a poorly educated, forty-eight-year-old tailor--in a cow pasture on the outskirts fo the town of Cuapa, in Nicaragua.  This "true" incident took place less than ten months after the Sandinistas overthrew the half-century-old Somoza dynasty and two years before the full onset of the Contra War, the bloodiest military conflict in that nation's history.

My interest in Bernardo's story arose when I returned to Nicaragua--after nearly a twenty-year absence--and met the seer, in March of 1999.  By that time the country had been at peace for a decade.  Upon hearing Bernardo's life story, I immediately knew that the best way to capture its many dramtaic and magical dimensions was through fiction.  As Joseph Campbell posits in The Hero with a Thousand Faces, to try to render miraculous events in a straightforward manner, narrating them as the truth, will always lead a writer into bathos.  In other words, in striving to accurately describe the sublime nature of Bernardo's experience, I would have inevitably overreached and toppled into the absurd.  His tale, and the tales of his compatriots, deserve better....

What you find in these pages, then, is Bernardo Martínez as I have recreaed him, and as seen through the eyes of the other characters--every one of them, beyond argument, fictional.  Nevertheless, most of the events related within, even the miracles, have their basis in occurrences that have taken place, or are believed to have taken place...

Regardless, one of my objectives was to immerse the reader in the lives of Nicaraguans during the latter part of the twentieth century...My hope is that this novel will give readers some insight into what it has meant to be a Nicaraguan during such tumultuous times.


Bernardo de Cuapa died on October 30, 2000.  His remains are buried in the town's old church, just a few steps away from where the image of la Virgen first illuminated for him.  The Nicaraguan Catholic Church has declared his former cow pasture, the place of the apparitions, a holy site.
El Pueblo de San Francisco de Cuapa is most welcoming to all pilgrims and visitors.

So far during the book tour Bernardo and the Virgin and author Silvio Sirias have visited the following blogs:

Tonight there will be a Live Chat with the author at Condor Book Tour's Author Chat Salon starting at 7pm-8pm EST.  Come by and say hello!

Next week the book tour continues with the following stops:

Here are some exciting details about this Book Tour:

100% commissions generated through books bought through Condor Books (an Amazon affiliate site) will be donated to Unicef's Storybook Gift, which delivers culturally-appropriate children's books to children in need around the world. So buy your copy now!

Dulce Bread and Book Store is our featured Independent Bookstore for this tour, please visit and support your indie book store!

All participants in this book tour (leave a comment at any participating blog) are entered to win a Kuna Mola.  The mola is the signature craft of the Kuna Indian women of Panama. The Kuna Indians live in Kuna Yala, known commonly as the San Blas Islands, an archipelago of more than 300 islands on Panama’s north coast. 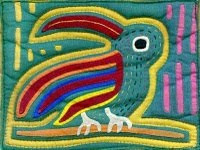