"It took me a long time to figure out that any poem I write is political just based on who I am and my background."--Oscar Bermeo 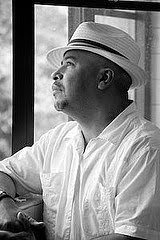 "Bronx-raised, Ecuadorian-made" poet Oscar Bermeo is the author of four chapbooks Anywhere Avenue, Palimpest, Heaven Below and To the Break of Dawn.


He is the founding curator of the Acentos Bronx Poetry Showcase as well as a founder, curator and host of synonymUS, a multidisciplinary poetry series at the Nuyorican Poets Café.


Besides being a featured writer at various institutions such as The Loft Literary Center, La Peña Cultural Center, and the Studio Museum of Harlem, Bermeo has facilitated workshops at Rikers Island Penitentiary, the Bronx Academy of Letters, and Youth Ministries for Peace and Justice.

I'm forever grateful to Oscar Bermeo for sharing his thoughts with me and Musings' readers through the following Q&A which we conducted via electronic mail.

*********
NB:  Oscar, as a writer just beginning my own journey, I sometimes struggle with the question of what makes a poem good. Or maybe a better term would be work. What makes a poem work for you, personally?

OB:  First off, I need a poem to accomplish its intent.  If a poet sets out to write a sonnet, then it should be a sonnet. If a poet sets out to write a rant, it should be a rant.  No filters, no explanations, no apologies  .  The other thing I look/listen for is perspective. Is the poet an observer, a participant, unreliable narrator, omniscient authority, or does it shift perspectives?  I read/hear some poems where the poet starts in a very declarative stance but when it comes time to actually say something important, the poet shifts to a soft world view. I don’t dig that.  I like poems where the poet claims a position and writes from that perspective.  It gives me a better sense of the poet as actually involved and living in the real world and not just writing for writing's sake.

On another level, I want a poem to wow me with its craft and art.  I want the poem to take me to unexpected places, subtly modulate tones, physically move me through the poet’s world, and I want it to do it without me noticing its happening.  I love poems where I know where the “turn” happens but as I experience the poem I get caught up in the language and emotion and miss the “turn.” That’s the real craft.

NB:  Was there an experience that helped you gain confidence in your poetry or in yourself as a poet that you can recall, or did it just happen slowly over time?

OB:  It happened over time and it happened really slowly.  I started out as an open mic poet and started off with a string of readings where I was trying to find my voice and writing style.  It was definitely a process and the only encouragement I received came from Guy LeCharles Gonzalez, the curator/host of the a little bit louder reading series at Bar13 in New York.  Guy kept giving me spots in the open mic, even when I showed up late after the sign up, and I kept at it.  Over time, as the series grew, it’s now known as The louderARTS Project, I grew as well and over time found my voice as a reader and my style as a writer.

NB:  How do you know when a poem is done?

OB: Two things have to happen before I can consider a poem as close to done as possible:

The first thing is that I need to read the poem out loud, preferably at a live reading with an audience, so I can feel how the poem moves through my body, how it interacts with the real world, what kind of feedback I’m getting from the recitation.  I’ve never written just for the page, I always write to share so the act of reading is key in the revision process.

The second thing is I try to put the poem in print.  I submit it for publication or I include it in one of my chapbooks.  I think of my poems in a very analog kind of way, each poem needs to build from the last poem and then lend momentum to the poem ahead of it, almost like a mixtape.  In the same way I don’t write only for the page, I also don’t write just for the stage; I look for a balance between the two, a place where the poems can exist in both worlds without losing any integrity in either.

NB:  Do you have a network of poets or other trusted sources that you share your work with for feedback, or is it a purely solo experience for you?

OB:   My most trusted source is my wife, Barbara Jane Reyes.  She is the first listener/reader for all my work.  It really isn’t a poem for me until Barb has heard it.  At first, she used to give me some real key pointers about crisp language and consistency but after a while I realized that I already knew the flaws in the poem even as Barb was articulating them.  That pushed me to be a harder editor of my own work and polish the poem to a real fine degree before sharing it.    I’ve always been lucky in that I’ve surrounded myself with very honest poets who weren’t afraid to tell me hard things about my poems.  In return, I try to honor that honesty by taking their advice to heart and putting it into action, or letting the person know why I won’t follow that piece of advice.  Either way, I thank the person for reading the work and knowing that I do value their opinion.

NB: How do you start a poem: are you inspired by language, themes that come to you mysteriously, or do you set out to talk about something a little more purposefully?

OB:  I’ve spent the last four years developing a manuscript, Anywhere Avenue, a poetry collection based around the misperceptions of the 70's era South Bronx, the home of hip-hop.

I’ve immersed myself with as much poetry, literature, film and art about the BX as possible so that I can continue adding to my manuscript. I’m always thinking about poems to include in the manuscript—new forms, experimental literature, flash fiction, everything. I keep mining my memories and asking old friends about their recollections all the time.  My focus is pretty sharp so even when it feels like it may be “mysterious,” it’s really a product of persistence.

NB:    What is your opinion on MFAs for aspiring poets?

OB:  I think anything that helps a poet continue in their development is a good thing.  For some poets, that might mean working more on their recitation so they may want to stay involved in live readings.  For some other poets, it involves getting a more hands on approach with their mechanics.  If that’s the case, then a MFA sounds like the right move.  Or they could apply for Squaw Valley Writers Workshop, maybe VONA, Cave Canem or CantoMundo.  There are a lot of options out there.  The question to MFA or not MFA turns poetry into a very small house with only a few little rooms, poets need to step out of that mindset and take serious control over their futures.  If a poet has laid out all his/her options and decided MFA is the best route, more power to them.  If they decided the best option means another way, then that’s cool, too.  As long as poets continue developing their own craft, that’s all that counts.

NB:  What is the most exciting thing (in your opinion) happening right now in Poetry?

OB:  Poetry is always exciting.  Seriously.  There’s nothing new under the sun.  People get all worked up about the internet, social media, and e-publishing but its all just the penny press all over again.  Sure, it may be a little faster and it’s definitely more convenient for armchair poets but I think it detracts from the fact that poetry is always reinventing itself and creating exciting moments all the time.

NB:  Who are some of these poets creating these exciting moments in poetry today?

OB:   Barbara Jane Reyes.  Her new book Diwata is just out from BOA Editions and it is amazing.  I’ve seen this book evolve from idea to group of poems to full collection and now fully realize the volume of work and dedication it takes to create a book that honors the traditions of orature and literature to the highest level.

Tara Betts, an old friend from my early open mic days. Her first collection Arc & Hue has recently come out and has been quite the inspiration.  The poetry is finely crafted and the political voice urgent. I also remember when Tara was envisioning this book and her determination in getting it published.  I appreciate that kind of poetic gangster.

John Oliver Simon, an accomplished poet and translator who has been a part of the Bay Area poetry community for years.  He also teaches bilingual poetry to elementary school students and I’m in awe of his ability to draw out quality poems from youngsters.  It’s been an honor to witness his skills in the classroom.

NB:  Oscar, what do you know now that you wish you had known about poetry when you first started this journey?

OB:  The realization that I don’t have to insert overt political statements into my poetry in order to make it “political.” My early poems centered on culture, food and love.  Whenever I read them, I always felt I was not being political enough.  It took me a long time to figure out that any poem I write is political just based on who I am and my background.

NB: Thank you so much for your generosity, Oscar .

OB: Thanks for all these questions, Nilki, it really got me thinking deeper about my own process.

Make sure you check out Oscar's online poetic journal Intuitive Intertextuality, where you can stay updated on all his current projects.

Oscar's also a proponent of gift economy.  Check out his chapbooks here and if you have a killer cd, book or other item in your media library that you'd like to trade, give him a holler here.
at 8:37 PM